Terms to Increase Your Popularity in Old English Conversations 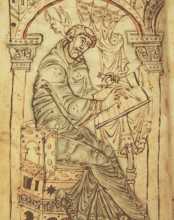 Here I am still talking about Beowulf. (Even better, Caedmon's next!) While you're hopping down the Old English trail with me, it's always fun to discover new words. Of course, they're not new at all - but they've long been dissolved or have evolved into something else.  Here's a short list that you can throw out in casual conversation.

Words from Beowulf we could have kept

Byrnie - this just sounds like a fashionable jacket. It was a shorty, falling just above the waist with sleeves stopping at the elbow. Oh, it was made of chainmail. Today's versions could be quite fun crafted from can tabs. Recycling with a twist.

Kenning - Meaning a "turn of phrase," or a metaphor, it refers to word-groups that seem clever to us, such as "wave-floater," meaning a sailing vessel.

Mere - translating into a "lake," this term does still stand today, but it's paired with other words, such as Windermere.

Scop - The scop was a poet, but this capacity also required singing along with a talent for entertaining. And he had to be a historian as well. Multi-tasking at its best.

Thane - a fighter, or warrior. Thanes ranked above common folk, but weren't royalty, either.

Weder-people - This is a bad term, a slanderous attack on the Geats (Beowulf was a Geat). But isn't it much nicer than some of the things we hear today?

Wergild - also known as a "man-price." The ultimate grief-reliever when a man was killed. His kinsmen would be required either to slay the killer or extract a "man-price" from him, equal to the deceased human's pre-determined value.

Wyrd - a "fate" or "fates," which in pre-Christian terms was the replacement for an almighty deity.