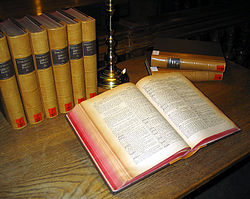 Do you sound like an idjit when you open your maw?

For years, instead of saying “declaration,” I said “declaranation.” I guess it sounded cute when I tried to debate people in the fifth grade, but by the time I was in high school I had to lose that extra syllable quick! I know people who pronounce sink “zink,” or even who pronounce words like milk and pillow “melk” and “pellow,” which is pretty common around here in Missouri. When people say “warsh cloth,” rather than washcloth, though, I gotta draw the line.

So when I read this list of ten often mispronounced words that make us sound like idjits (to paraphrase Bobby Singer from Supernatural), I had to giggle. Yes, I say a couple of these words wrong. I mispronounce “prerogative” the most, and it’s only been the last few years that I’ve made a concentrated effort to say “sherbet” correctly. Everyone I know says “Sure, Burt!”

The one word that I always get wrong isn’t on the list, though, and that’s fruition. I always want to say fruit-tition. Which word makes you feel like a moron when you say it? Maybe we should just embrace the fact that we’re all going to mispronounce something sometime and give ourselves a break…

But those warsh cloths!


Once, twice, three times a quotable