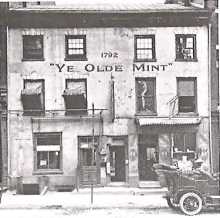 If you think turning back to Shakespearean times is far enough for Old English, you'll have to think again - then stand corrected. However, it's a common misconception and now we can set that story straight. Shakespeare did not write in Old English style; he was alive when Early Modern English was en vogue. That probably explains why it's somewhat more readable, too. The Canterbury Tales is another example of what is not Old English. (It's Middle English, which predates Shakespeare a bit.)

What Is Not Old English and Other Misconceptions

Perhaps the biggest misconception about Old English revolves around just one word:

During the official Old English time period (about 450-1100 A.D.), this word that you see on thousands of signs is actually pronounced:

That may come as quite a disappointment to some, but doesn't it make sense?

That doesn't mean the word "ye" didn't exist (as in Hear Ye, Hear Ye), but in that case it was properly spelled "ge." It referred to a group, however, and not an individual. Over the centuries, that would transition into "thou" as a more accepted Middle English term.

A second popular misconception is the language spoken at Renaissance Fairs (or Faires, Fayres). It shouldn't be referred to as Old English. That may be splitting hairs for some but, really, the Renaissance events we hear about most are centered around the reign of Queen Elizabeth 1, which was later on in the 16th century.

Forthwith, if you runneth into someone who durst to take liberties, they shallest also stand corrected.


Old English - From Runes to a Proper Alphabet