Translation Can Be (Almost) Fun 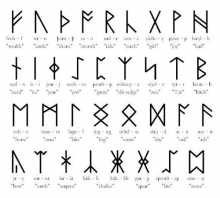 The original Old English, or Anglo-Saxon, alphabet was among the origins for our modern-day letters. Some were the same; others looked completely different. With their Germanic origins, they were also based on runes, or markings that have magical, even satanic, connotations. While this may not be a need-to-know for the casual reader, it’s always interesting to see where our current language rose from many centuries ago.

In the featured photo, you can see the original runic markings. Here’s a larger, more readable version. These are also known as “futhorc,” which was a derivation from the “older futhorc.” While it can all get a little complicated, here are a few basics.

Three extra letters (þ ð æ) were included along with

As you can see, J, Q, and V are not included. K and Z are two more not typically listed as part of the Old English alphabet.

Commoners typically didn’t write things down - that was left to the poets and monks. They’re responsible for adding the runes. Some are similar to their modern-day counterparts, including B, R, S, and T.

Where it becomes complicated is - the placement of vowels and consonants determined how they were pronounced. I’ll save that for another time.

You can see, though, how it’s easier to understand original Old English works verbally than it would be to make an attempt to translate the written word.