What is Old English, Anyway? 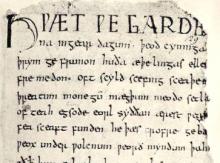 Our modern language is a far cry-eth from Ye Olde English - yes, indeedy. Television shows and the movies tend to take it down a path that's also very different from the "real" olden days. While it's a bit of fun (much like Pirate-speak) to throw out a few "thous" and "thees," it's interesting to dig a little deeper without making all the intricate grammar stuff too complicated.

If we were able to travel back in time, we'd be lost. Conversation would sound like a foreign tongue rather than anything remotely similar to our everyday words. The alphabet would also look a little out of kilter. Jumping back to a time period between the 5th and 11th centuries - that's where Old English (Englisc) technically begins. Of course, it started with the Anglo-Saxons in England, otherwise known then as Englaland. Dialects were split: Kentish, Northumbrian, Mercian, and West Saxon (the most used of the four in written texts).

In time, "old" English became "middle" English, then it became "modern," or simply English. By now, its evolution was nearly complete. Consider it the same as a tenth grader trying to interpret 1920s Swing music. That's why there are entire university departments dedicated to English in some form or another. Scary, that.

Word order is another point of confusion. While letters are oddly shaped and many of them have nothing to do with how they're sounded, it's the order of a sentence that perhaps has led us to have a little more fun with the language.

And, although serious scholars wouldn't approve, I'd like to give personal thanks to Monty Python.