A Wordy Poet with Ties to Tolkien 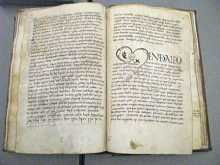 Cynewulf was an Anglo-Saxon poet known for his very lengthy works. He’s among the most-recognized writers from Old English times although very little is known about his life. Scholars suggest his works weren’t exceptional by any means, but they do portray the typical tempo of Christian epics during that era. It’s also from his works that J.R.R. Tolkien got the idea for “Middle Earth.”

The poet, whose name translates into “kin wolf,” produced four epic religious pieces found in two different anthologies. The first two are “The Fates of the Apostles” and “Elene,” which are found in the Vercelli Book. Two additional poems, “The Ascension” and “Juliana” are part of the Exeter Book. (The “books” I’m referring to are groups of works that include multiple writers from the Old English period.) As far as Cynewulf’s skills, he believed his turn of words (he referred to it as the “art of poesy”) was a true gift from God.

It is from Elene and The Ascension (also known as Christ II) that Tolkien found his inspiration. They make reference to the angel “Earendel” and to “middangeard,” which translates into Middle Earth.

All four poems are based on martyrdom as in each, the main character suffers - sometimes horribly - for his or her religious beliefs. For instance, Juliana dies at the hands of her pagan suitor who unsuccessfully tries to force her to abandon her beliefs.

Who was Cynewulf? Academics believe he was perhaps an abbot, a priest, or a bishop with many leaning toward the latter. He was obviously an educated man, skilled in Latin as well as the ways of the Catholic Church. Any of his works are worth reading.


Back to Beowulf - The Movies