Why is the Epic Poem "Beowulf" So Important? 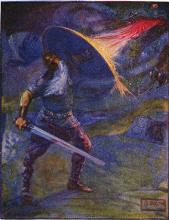 In casual conversation, Beowulf will probably never come up - nor should it. In its original Old English form, it's not readable, anyway. Those of us who studied English in college, however, have either fond memories or random nightmares regarding the subject. It's discussed to death, broken down, and enjoyed to a great extent by many. Sound boring? It shouldn't! There are some interesting aspects in Beowulf that everyone should know - and might even liven up a dragging conversation (well, maybe not, who knows?).

Beowulf is among the most popularized Old English writings. The author is unknown and the manuscript wasn't even discovered until the 16th Century. It is confirmed this is Anglo-Saxon in origin and scholars tell us that it shows the evolution of language into Modern English.

The tale begins with Hrothgar, the King of Denmark. He builds Heorot, which is a large hall where his loyal warriors can make merry. However, the demon Grendel kills his troops over the span of several years. Beowulf (a Geatish fighter) and his men arrive to vanquish Grendel. In the ensuing fight, Beowulf prevails, ripping off Grendel's arm to hang in the hall. The demon returns to the swamps to die and the partying resumes.

But, wait. A swamp-hag who also happens to be Grendel's mother appears. She kills a trusted warrior before Beowulf and his team enter the swamps for revenge - with success. Beowulf sails home and eventually becomes king of Geatland. He's adored as the kingdom thrives. Alas, a dragon then comes to life and Beowulf, now an old man, must once again defend his people. He does so, but at the cost of his own life.

Briefly, Beowulf has every component required to be a classic: Symbolism, Power, Drama, Heroism, and Death.

Next week, I'll be posting some of my favorite "Beowulf" terms and quotes. Now, that will surely lead you down the path to sparkling and scholarly discussions.